pr-notifier is a native notification service which will alert you to create a pull request as soon as the allowed limit of changes is exceeded. The purpose is to avoid long pull requests for reviewers. 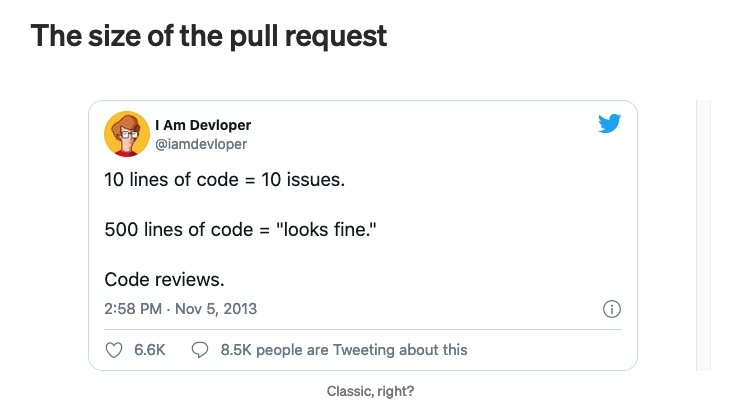 Either through cloning with git or by using npm (the recommended way):

And pr-notifier will be installed globally to your system path.

You can also install pr-notifier as a development dependency:

There are two ways to add this service to your devlopment cycle.

Recommended way is to add this in a post development script or after npm run dev which usually watches for changes. Example for use with nodemon:

If you have a nodemon.json file, add this command to the restart event:

Using nodemon via CLI or within a package.json script:

This will result in a native notification alert being generated every time the change limit exceeds.

Or just add as a script in package.json scripts section:

And execute npm run pr:notify wherever you want to.

Both arguments are optional but i'd recommend changing atleast allowedLines as per your own PR guidelines.

Currently this works on Linix/Unix based systems with NodeJS only. Windows support will be added in future.

Also don't forget to star the repo if you like what you see.