Node-RED node to query the Webconnect interface of SMA inverters.

The implementation has been tested with an ethernet connected Sunny Tripower 10.0 but should work with various similiar models. I'm happy to compile a compatiblity list of successfully tested models here.

Configure the IP address, user group and password in the node properties. Uncheck the "Use HTTPS connection" checkbox if your inverter doesn't support HTTPS. 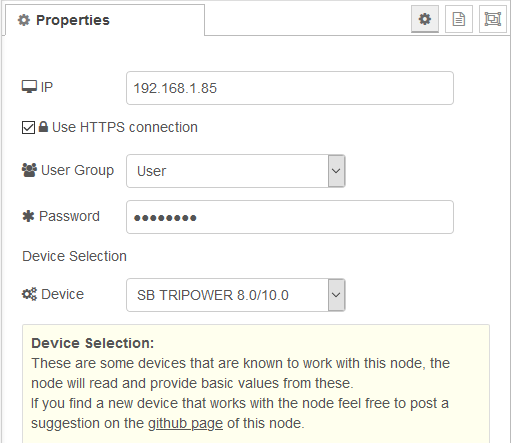 In my testings I've ran into problems with the maximum number of sessions the webserver supports (4 in my case). The node creates a session and reuses that until the node is restarted or the session expires. If you're using a reasonable small interval (I'm using 5 seconds) to query the inverter the session normally shouldn't expire. Otherwise a session expires after around 6,5 hours according to my testings. But it may happen that a created session get's lost when the node is stopped ungracefully. Logins to the web interface via a web browser count against the same session limit as well.

This node tries to collect the metrics very agressively, i. e.: