A Node-Red node for performing conversions between different geographic coordinate reference systems (CRS) based on the Proj4js JavaScript library.

This node is primarily intended for converting between coordinates provided in global coordinate reference systems such as World Geodetic System (WGS84) which is used by GPS, or WGS84 Psuedo-Mercator which is commonly used by web mapping platforms, and the local coordinate systems maintained by national mapping agencies to ensure optimal accuracy for applications in civil engineering and construction.

The user specifies a coordinate reference system to 'Convert from', and a second to 'Convert to'. When the node receives a payload with coordinates in an accepted format it will transform the values from the first CRS to the second.

The user first chooses a method for specifiying the two CRSs to use in the conversion. Selecting 'EPSG Codes' provides prepopulated dropdown lists. 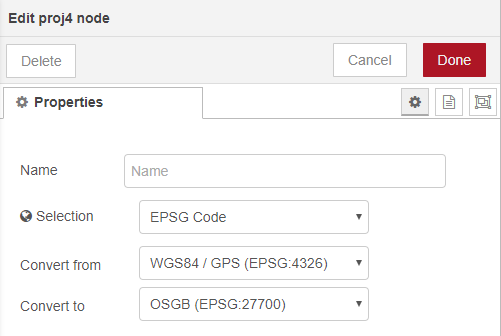 Alternatively users can select 'Proj / WKT string' in order to input the relevant proj-strings or well-known text (WKT) representations as found on epsg.io or spatialreference.org. 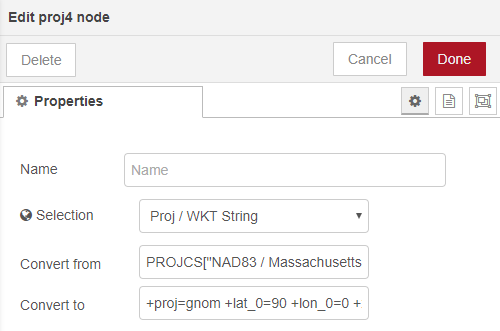 As with proj4.js library, coordinates can be provided as an object of the form {x:x,y:y} or an array of the form [x,y]. Additionally the node will parse the incomming message payload for coordinates identified by one of the following combinations of payload properties:

An example file has been provided which demonstrates common usage of the node. Access the example by navigating to the Node-Red editor's menu and selecting Export > Examples > node-red-contrib-proj4 > Coordinate Transformation.

Further details of different coordinate reference systems can be found on epsg.io.

If you are interested in suggesting enhancements please raise an issue for review via GitHub.