This Node-RED node is just like the core node "function", only that this node loads the script to be executed from an actual file on your drive.

This may help you developing for Node RED. Instead of having to write your Javascript code in that small textfield in your browser you can use your favorite editor/IDE. 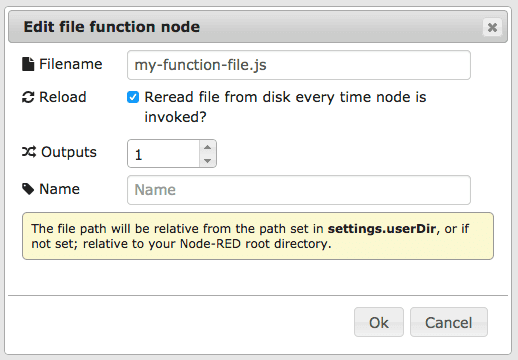 The file path will be relative from the path set in settings.userDir, or if not set from the Node-RED install directory.

Either set the filename in the configuration dialog of the node, or override it by the msg.filename property of the incoming message.

If the checkbox is set to only read the file once (when flow is deployed/Node-RED is started) but another filename is sent in msg.filename, it will read the file from disk and cache it anyways. Only the last called file will be cached. If you're alternating between two different files you're better of creating two different nodes if you're looking for perfomance.

Unless you're working with functions called very often or with very large functions you can probably just leave it to reload the file every time it's invoked.

Writing functions in this node works works just like functions in the the original function node (except that you write it in an actual file and no in an input field):

The message is passed in as a JavaScript object called msg.

By convention it will have a msg.payload property containing the body of the message.

The function should return the messages it wants to pass on to the next nodes in the flow. It can return:

If any element of the array is itself an array of messages, multiple messages are sent to the corresponding output.

If null is returned, either by itself or as an element of the array, no message is passed on.

Create a file called sample-file-function.js in your Node-RED root folder. Add the following content to that file:

Import this flow (or add it manually by creating a simple [inject] > [file function] > [debug] flow yourself. Add the value sample-file-function.js to the filename field in the file function node):

Deploy the changes and click the inject node - check the output in the debug sidebar!