magicpatch makes the Jupyter IJavascript kernel as close as possible to the IPython experience by adding %magic commands, !shell execution, {variable} substitution, and more! You can find examples in this Jupyter notebook. 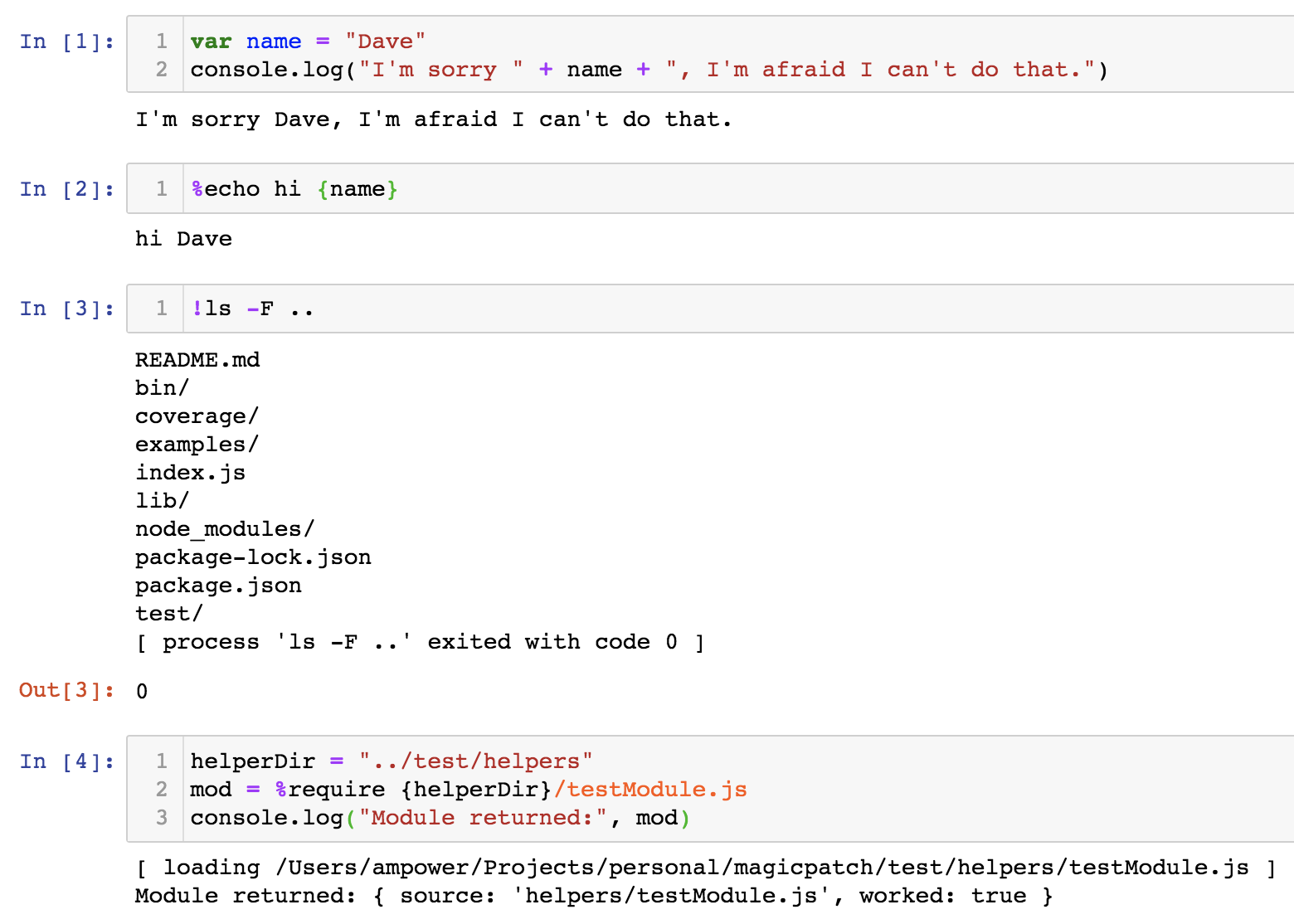 Wherever possible, this module tries to duplicate the features of IPython experience.

Magic commands traditionally start with % because it isn't a valid operator in Python. This package adds a number of default magics and allows you too define your own using the %addmagic command or through the $$.addMagic global function.

As a quick introduction to magics, here's a simple example of the %echo magic:

See the built in magics sectiono below for magics included in this package, or while running Jupyter you can use %lsmagic to list the names of all the magics or %quickref to get a quick guide to all the magics.

Shell commands can be run quickly by starting the line with !. For example, !ls will run the command ls in the underlying shell and show the output.

The output of magics can be assigned to variables. For example, mod = %require myPackage would load the myPackage npm module and assign the results to the variable mod.

Variables can be used as inputs to magics by wrapping them in curly braces. For example, %echo {myVar} will print the contents of myVar.

Input is cached in the global In and _ih arrays, where In[0] was the first text that you ran in your notebook. You can also access the last three inputs through the _i, _ii, and _iii global variables.

Similar to input caching, the output of your last three commands is stored in _, __, and ___. Note that there is no global Out array due to memory usage concerns.

Cell magics allow the entire Jupyter cell to be treated differently. For example %%script bash will treat the rest of the cell as a bash script. You can find a demo in this notebook.

By default, all magics require the leading special symbol %, but you can turn that off for convenience using %automagic on. With automagic turned on, %echo can simply be typed echo.

To date, the following magics have been added:

Adding your own magics is as easy as calling %addmagic %yourmagicname yourMagicFunction from Jupyter or $$.addMagic("%yourmagicname", {fn: yourMagicFunction}) from a module. Your magic will be passed an array of strings that were passed in on the command line. Similar to process.argv the first string is always your command name. For more advanced usage, such as adding documentation for your magic, creating cell magics, or accessing magicpatch internals to create fancy magics, refer to the AddingMagics.md documentation.

This is a community project! All bug fixes, new magics, and contributions are welcome. I really want to encourage people to add new magics -- anything that helps people develop faster or have more fun would be a worthwhile contribution.

Contributors and participants are expected to be good humans. No jerks allowed.