A plugin for ESDoc that adds D3 interactive dependency graphs for packages and source code managed by JSPM / SystemJS and soon NPM. A context menu is available that opens associated Github / NPM links.

Please note that this plugin is in heavy development and currently only JSPM package dependency graphs are available. You must use esdoc-plugin-jspm version 0.6.6 or higher for this plugin to work.

It should be noted that all TyphonJS repos now are standardizing on .esdocrc for the ESDoc configuration file. Both .esdocrc and esdoc.json are supported by the esdoc-plugin-jspm and forthcoming esdoc-plugin-npm plugin.

For the latest significant changes please see the CHANGELOG.

If installing and working directly with esdoc-plugin-dependency-graphs the following is an example integration including JSPM support via esdoc-plugin-jspm for package.json:

Given the NPM script defined in package.json then simply run npm run esdoc.

Below is a demo image of the JSPM dependency graph generated for the backbone-parse-es6 Github package loaded via JSPM. While not pictured a context click on graph nodes opens a context menu which will provide links to Github or NPM depending on the code being managed. For the context menu links to work for NPM packages you must include the repository field in package.json. JSPM currently supports packages from Github and NPM; Github packages are colored orange and NPM packages are colored light red. Aliased JSPM packages where the assigned name does not match the package name the package / folder is red. In the overflow menu options you may show a table view of all packages and show / hide aliased packages names. 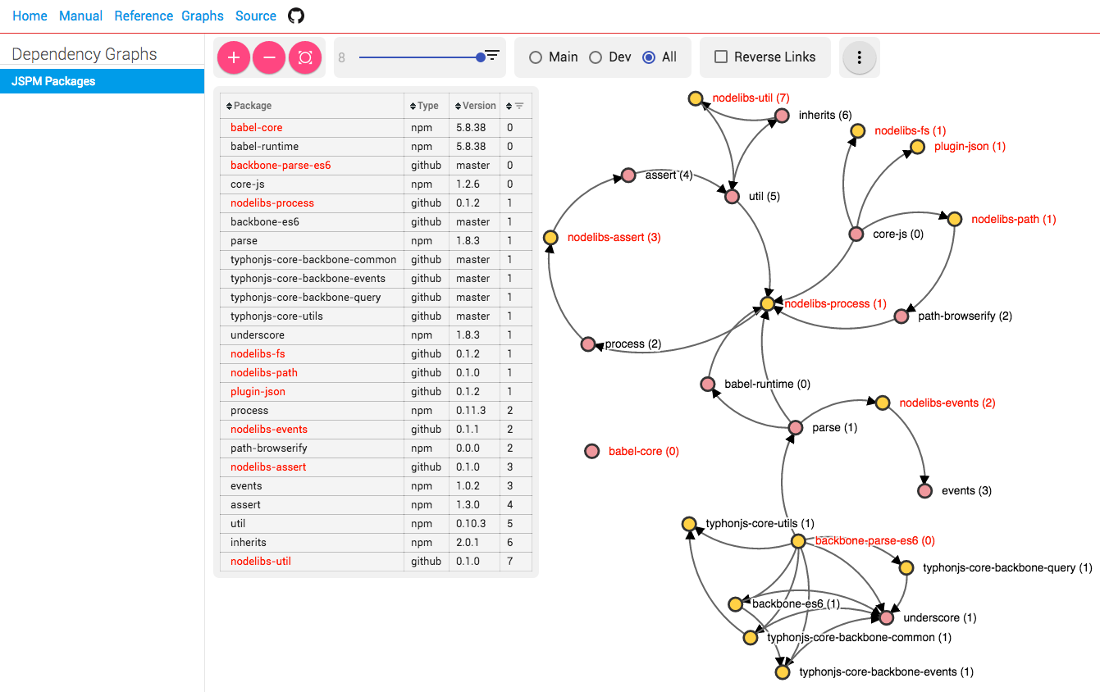