Efficiently sort interdependent tasks into a sequence of concurrently-executable batches.

Often one needs to schedule interdependent tasks. In order to determine task order, the classic solution is to use topological sort. However, toposort typically outputs a list of individual tasks, without grouping those that can be executed concurrently. Batching-Toposort takes this additional consideration into account, producing a list of lists of tasks. The outer list is ordered; each inner list is unordered. 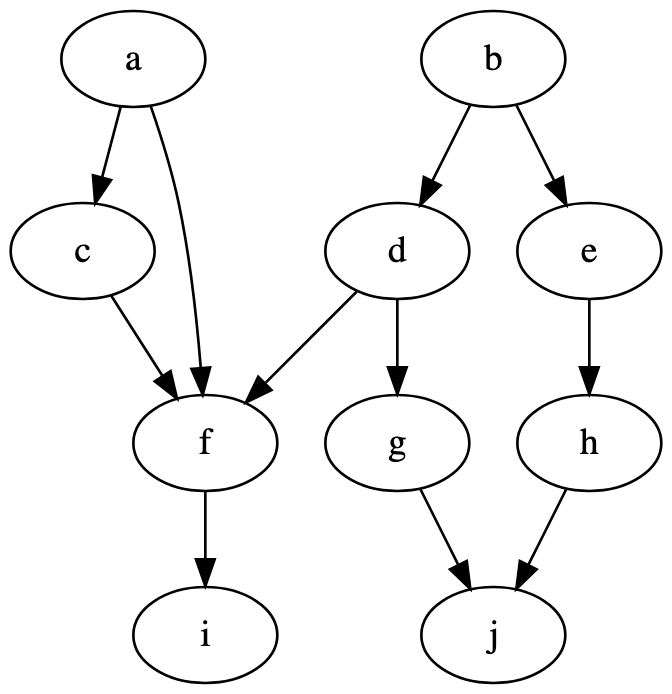 Batching-Toposort expects a directed acyclic graph (DAG) implemented via adjacency list. In other words, construct an object whose keys are dependency IDs, and whose values are lists of dependent IDs.

(If there is demand, Batching-Toposort may one day include a small DAG API and/or DOT support for convenience, but as of now it is the developer's role to construct the graph.)

In short, Batching-Toposort adapts Kahn's Algorithm by inserting each round of root tasks into sublists rather than appending tasks directly to the main output list.

The classic DAG toposort keeps track of each task's in-degree (number of dependencies). As root tasks (those with no dependencies) are added to the output list, their dependents' in-degree counts are decremented. For a task to become a root, all of its dependencies must have been accounted for. The core algorithm is illustrated below in pseudocode (the actual implementation is in src/index.js).

The space complexity is slightly better at O(|V|).